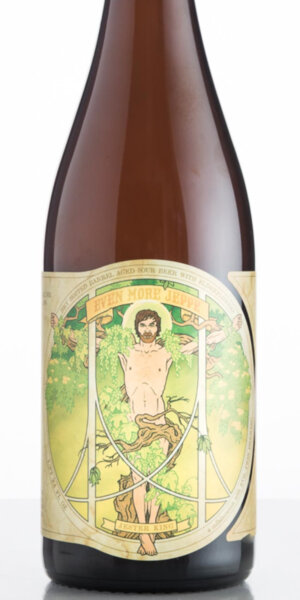 Jester King / Evil Twin Even More Jeppe
Extremely rare. 2016 one time release. Bottles sent by Jeppe Jarnit-Bjergsø for KANAAL's 7 Anniversay. Jeffrey Stuffings Founder Jester King Brewery: We’re excited to introduce Even More Jeppe, our second collaboration with Evil Twin Brewing! Even More Jeppe follows the same path as its predecessor — World’s Wort Twin. For that beer, we attempted to mimic the flavors and aromas of one of Jeppe Jarnit-Bjergsø of Evil Twin’s favorite coffees, without actually using any coffee in the beer. Here, we sought to mimic the flavors and aromas of New Zealand Sauvignon Blanc without using any grapes. If you’re not familiar with New Zealand Sauvignon Blanc, it’s known for having flavors and aromas reminiscent of bell pepper and tropical fruit. Our effort to mimic these flavors involved taking farmhouse ale fermented in oak barrels with our mixed culture of brewers yeast, native yeast, and native bacteria, blending the barrels, then adding dried elderflowers and Nelson Sauvin hops to the blend. Elderflowers were selected to impart the bell pepper notes and Nelson Sauvin hops were selected to impart tropical fruit character. Creating Even More Jeppe was an exercise in patience. The base beer took about one year to fully mature in oak barrels. The barrel aged blend with dried elderflowers and Nelson Sauvin hops then went through a few different phases. Initially very pleasant, the blend morphed into something that, in all honesty, I’d describe as having aromatics of cat pee and garbage. After another eight months of re-fermentation in the bottle, the beer finally transformed into something that I believe has explosive aromatics of tropical fruit and a beautiful, balanced acidity. What was once a beer I was afraid would never see the light of day is now something I’m really excited to release. I’ve written this many times before on our blog, but our beer is alive and ever changing. Every beer from us is teeming with living microorganisms that slowly alter the flavors and aromas ove

Jester King is an authentic farmhouse brewery committed to mixed culture and spontaneous fermentation. Our beer incorporate our natural surroundings and local agriculture, to make beer uniquely tied to a time, place and people. Our tasting room provides a beautiful, relaxed setting to enjoy the Texas Hill Country with friends and family.
2020-04-21T12:33:56+03:00
69.99 69.99 BGN 1
1550 1550 KGM
() 69.99 BGN Kanaal Cellar Archive Out Of Stock N/A